Epic and dark action adventure of a samurai and his cat in a metroidvania game set in medieval Japan and its mythology.
FOLLOW US!

The Spirit of the Samurai is a metroidvania style game with a unique style and environment, in which you will be a samurai, a cat and a kodama. With a spectacular design and animations, taking care of every detail, we offer you the possibility of immersing yourself in a great adventure, with a great story told as if it were a movie in which you are the protagonist.

Explore a dark and beautiful world set in medieval Japan and its ancient mythology, fight against mythological creatures, demons, undeads... Join a samurai and his cat on an epic and dangerous adventure to recover his body and destroy the evil.

The Spirit of the Samurai is a Metroidvania with a deep exploration style gameplay with non-linear levels. While you travel around the giant map, every single spot counts, as you can discover new items, new secret areas, particular puzzles to solve and unique enemies.
One of the main features of the game is the possibility of playing with three characters in very different ways throughout the adventure, such as a Samurai, a Kodama and a cat.
Each character has different characteristics from the other. Only with the combination of all of them can we succeed.
Kitsune will guide us through the journey, show us how to continue and help us in many ways. He is a fundamental piece in this story.

With stunning visuals, different abilities, combos and special attacks, The Spirit of the Samurai provideshighly agile control and deep, smooth action combat. You can switch between a variety of powers where each of them has different stats and you can evolve each power throughout the game. You can upgrade your character's basic skills by leveling up strength, stamina, or agility. Every choice counts.
COMBAT SYSTEM
we have worked hard to get a fast, smooth and intense action combat. More satisfying than usual in Metroidvania style games. You have numerous combos that you can combine between them.
KILL CAMS
During combat the fatal blows will be shown from another more visual and spectacular perspective through high end quality cinematics that will not affect the fluidity of the gameplay.
SPECIAL POWERS
You can get special powers to deal extra damage to enemies and bosses. You must unlock and evolve these powers along the game. These powers at full strength can be terribly destructive.
ENEMIES & AI
Each enemy behaves differently. Most of them have an unpredictable behavior, they have been equipped with an AI that makes each game different and difficult, very difficult. It can be challenging to beat them successfully.
CHARACTER EVOLUTION
The characters will evolve each time you level up, you can increase their abilities and in the case of the Kodama, their powers as well. To increase the level you must defeat enemies, get objects, unlock secondary objectives ... 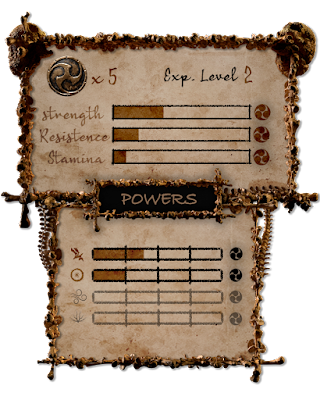 Our plan is to release The Spirit of the Samurai first for Pc (Steam), use all our efforts to get the best version possible. Once finished, our idea is to launch it for other platforms according to demand.

At the end of the 10th century, an Oni passed through a door of the world of the dead "Yomi", bringing with him a great army of dark beings. The first samurais forgot their differences and came together to fight against them. There was a great battle in what is today known as the Valley of Death.

The Samurais helped by the spirits of the forests commanded by Kitsune, managed to defeat the army of evil and return the demon to the underworld. The price was terrible, the samurai were greatly depleted and a cloak of death seized them. A small army of samurai settled among the lost mountains of the Deep Valley, watching and preparing for a possible return of the demon.

200 years later, samurai clans fight each other for power in the Genpei Wars. Death and hatred have fueled the power of the Oni, it is stronger than ever and it has decided to return.
Takeshi, a samurai of the Deep Valley and a descendant of warriors who fought in the great battle, receives a message in dreams from Kitsune: the Oni has returned.

After a bloody battle, takeshi is badly wounded by the demon. To prevent the Oni from feeding on his life energy, Kitsune transfer the spirit of the samurai to a Kodama before a Tengu takes over his body. Now Takeshi must recover his body and destroy the Oni, for this he must embark on a great adventure with Chisai, his inseparable cat. 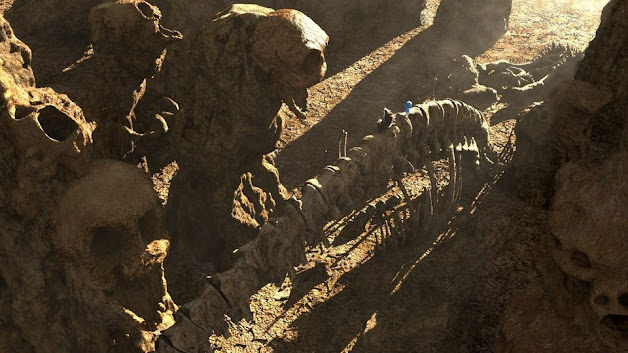 Despite their diminutive size, they will have to cross dangerous forests, huge caverns until they reach the valley of death, where unimaginable beings are waiting for them, all under the watchful eye of Kitsune, who will guide and help them throughout the entire journey. 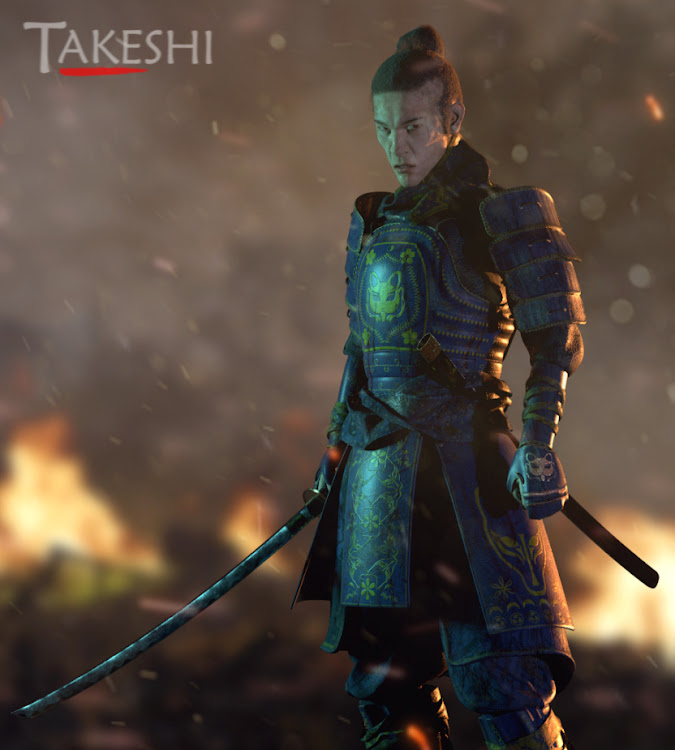 Takeshi is the last descendant of the line of samurai who won the Great Battle against evil 200 years ago. He has spent his entire life in the Forbidden Village preparing for a possible return of the Oni. Noble warrior with a biting sense of humor. Like its ancestors, it has the ability to see and communicate with the spirits of the forest. He never fights alone, Chisai, his inseparable cat accompanies him to all battles. Kitsune often speaks to him in dreams. 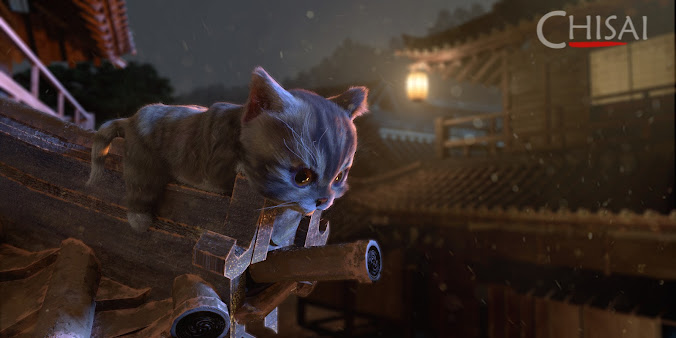 Takeshi adopted Chisai when her mother disappeared. It was a puppy and Takeshi fed and cared for it saving its life. Now they are inseparable, even in battle. Chisai faces rivals regardless of size and ferocity. He usually attacks them by damaging his eyes and blinding them, which provides a great advantage for Takeshi. 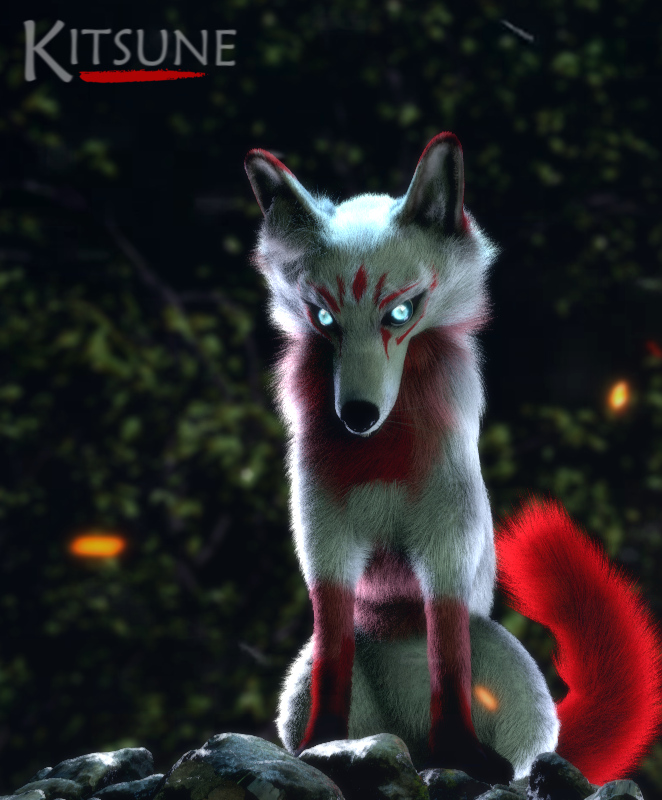 Kitsune, forest spirit in the shape of a fox. Guardian of the forest and the beings that inhabit it. He is very powerful and often communicates with Takeshi through his dreams. He fought in the great battle alongside the samurai. His presence is vital in the development of events due to his great wisdom, his magical powers and the great obedience and respect that the beings of the forest profess him. He will guide our heroes and be the driver of history. His character is unpredictable, he can be kind, sarcastic or very dangerous depending on the circumstances. 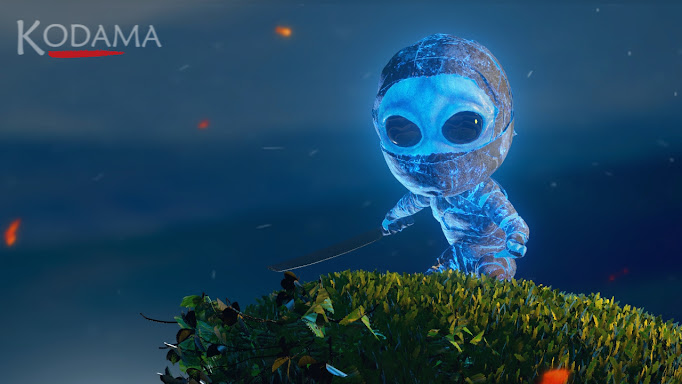 The Kodama is a tree spirit. they are dense forest dwellers, peaceful and very wise. They hate those who harm the environment and are not easy to see, they choose who to communicate with. Takeshi, like their ancestors can see and speak to them. Kodamas are surprisingly strong and powerful spirits despite their size. 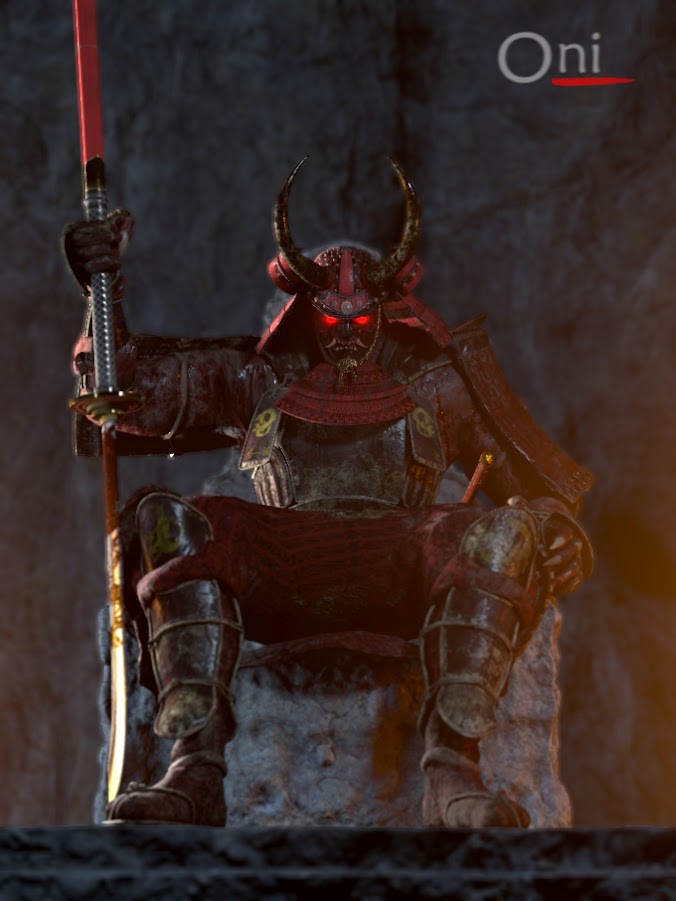 The ONI represents evil, he is a demon from the underworld who has recruited an army of dark beings to turn the world of the living into his kingdom. It is extremely powerful, feeds on souls, and is capable of possessing the bodies of the dead. The only way to defeat him is with the help of kind spirits from the world of the living. 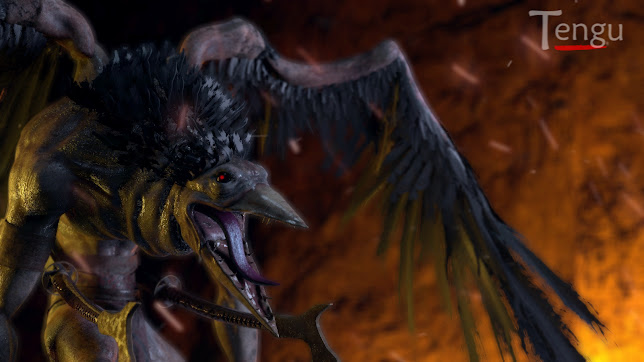 The TENGU are warrior demons, they serve the ONI and are part of its army. They are powerful and very skilled with weapons. They like to grab humans in their claws, fly high, and drop them so they smash against the ground. 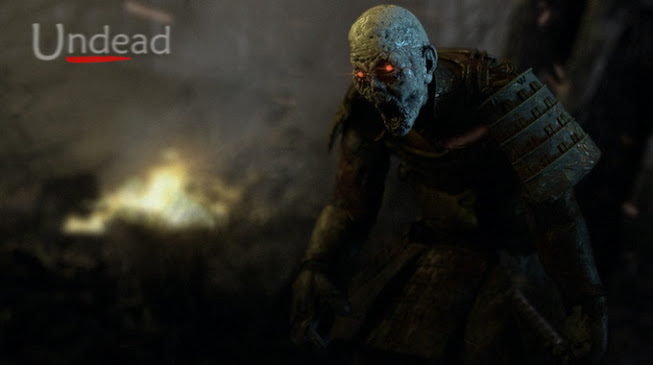 The undead are samurais death in battle who have been brought back to life by the Oni. They have no soul, the devil feeds them with his hatred and thirst for revenge. They are very dangerous as they do not feel pain and remember how to fight.

The Spirit of the Samurai is populated by a variety of creepy creatures. We designed a large number of types at this stage and we are still constantly creating new ideas.

The game world is designed with an incredible level of detail, a living environment with the idea that the player immerses himself in this journey. The story of the game takes place in feudal japan, we will start in the samurai village and we will travel through the mountains until we enter a hidden and dark world full of very dangerous enemies. In addition to the exterior areas, we will have to go through large underground areas, caves, dungeons, towers ..
These are some examples of some places you will have to go through: